He’s always a legend to me: in praise of Billy Joel

There’s a scene in classic rom-com Love Actually when Bad Harry teases his wife for still listening to Joni Mitchell. She replies, ‘I love her. And true love lasts a lifetime.’ It always makes me smile and think of me and Billy: an (admittedly one-sided) love that’s coming up for 30 years and shows no sign of abating. I recently saw him perform live for the 8th time, and it caused me to reflect on where this love originated and what it’s meant in my life. 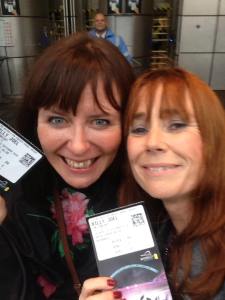 Getting ready for the Wembley Stadium concert last September, which I suspected might be the last time I’d see him (although I’ve been wrong before, so here’s hoping), I thought it would be fun to dig out my teenage diary from 21st May 1990 – the date of my first Billy Joel concert.

In a manner to be expected of a nearly-14-year-old, I (1) talk more about the minibus journey from Bolton to London and back (arriving home at 4.33AM Tuesday morning – responsible behaviour from the teachers who took us?!) than the concert itself, and (2) employ mainly generic superlatives e.g. ‘fantastic, wonderful, unbelievable’. A flick through the pages preceding the gig is revealing, featuring countdowns to the big night, and Billy’s birthday (9th May) duly noted (was I planning to send him a card, I wonder?).

How and when did the obsession (which was not a normal one, to be honest, in the days when most girls my age were attaching Grolsch bottle tops to their shoes and swooning over those blonde twins, oh and The Other One that Smash Hits called Ken) begin? As with so many of these stories, there was a boy, of course. A boy I had a crush on made me a mix tape (for younger readers, this is what we had before playlists. They were ace and we would search them frantically for romantic meaning, of which there was usually none. For further illustration of this, see Avenue Q, below, which spookily enough references Billy Joel*).

I became hooked on the same things I love today: his melodies, his piano playing, the sheer variety of his music, which ranged from jazz to pop to rock through classical and blues, and probably above all (being a bit of a fan of the words even then) his lyrics. I thought he was just a brilliant writer. I liked the way he used songs to tell stories; and those stories were about ordinary people, who, although they were usually from another continent, were people I could recognise, people I might know. He wrote about working class (or lower middle class), ordinary people.

I fell in love with Brenda and Eddie (see Scenes from an Italian Restaurant, best song ever, by anyone, yes ever), Anthony who worked in the grocery store, Bobby, who was driving through the city in a hot new rent-a-car, and Virginia with her much-coveted, well, virginity. I fantasised about the places: it was no coincidence that, later, New York would become my favourite place in the world. It was a kind of pilgrimage for me: while other people’s ‘must see’ lists were headed by the Empire State building and the Statue of Liberty, I sought out the Staten Island Ferry, Mulberry St, Sullivan St, and thrilled when I found them, humming to myself in a triumphant, dreamy way.

Now, it will probably come as no surprise to hear that the 14-year-old me was a full-on geek (and geekdom was not cool then, as it is now). Evidence: we did a kind of ‘show and tell’ in an English lesson, which was really just a ‘tell’, when we all had to get up and talk about something we really, really liked. I talked about Billy. I read out THE ENTIRE LYRICS to Goodnight Saigon (it’s a seven minute song, folks, and it includes the lines: We came in spastic / like tameless horses / We left in plastic / as numbered corpses). It’s fair to say the room fell into stunned silence. Not just a geek, a socially-conscious, earnest geek at that.

Then there was another boy. I wanted to kiss him so I made him sit on my sofa and watch the entire ‘Russia concert’ (again, see Avenue Q) and waited for a slow track (Baby Grand, I still remember it – not particularly conducive to smooching, being a love song to, well, a piano) during which to make my move. It wasn’t the last time I tried to enforce a Billy initiation as a precursor to romance; I can’t say it’s always been successful. I soon came to realise that not everyone would understand Billy as I did; and no-one, no-one, could love him as I did.

Over time my tastes broadened and eventually I could even pretend to be a little bit cool, because I started to like bands other, cooler, people liked (see: Stone Roses, Libertines, Arctic Monkeys. OK, hardly ground-breaking, but a step up for someone who had Genesis and Sting posters on her wall at uni). But I never lost my Billy Joel obsession, although at times I expressed it like a guilty pleasure. I continued to be frustrated by people whose eyes would glaze over and who would then mumble, ‘Uptown Girl, right? Er…that one about the river?’, would continue to suppress the urge to tie them down and perform a kind of inverse Ludovico technique on them, forcing open their ears while they absorbed the full glory of his back catalogue (particularly The Stranger, Turnstiles, and 52nd Street, since you’re asking). Every now and again, I would meet someone who shared The Love; in this crucible were special friendships forged.

Mostly though, as with all the best love affairs, it was just me and Him (yeah that’s right – I just capitalised him). He was with me through all of the growing up, the joys and the disappointments, of teens, twenties, thirties and he’s still with me in this proper adulting bit that’s happening right now. He’s my all-time favourite and that means for all time.

Thanks, Billy. Happy birthday. Don’t take any shit from anybody.