From Being Different to Precocious…it’s a long story

Two things have happened to me in the last week that have made me feel very old and very excited, respectively. This is handy as it’s always good to counteract a sudden awareness of your own relentless ageing with a bit of gleeful anticipation. The two things were: (1) I was asked ‘when did you start writing this book?’ and (2) I had my first ‘author appearance’ at the Bath Literature Festival, followed by a lovely champagne reception (I could get used to this).

I always say that I began writing Precocious in 2008 and this is true, in terms of its life as a novel. But the genesis of the book was actually way, way before. About 18 years ago, in fact. I thought it might be useful, even interesting to some, to write about how I got from one place to another. Apologies to those of you who already know the tale, who’ve heard it ad nauseum, but hey, you don’t have to read on!

As part of my English degree at the University of Warwick (1994-1997), I took a course in Creative Writing, taught by David Morley and Maureen Freely. Part of my end of year submission was a 3000-word short story entitled Being Different. The main characters were Fiona, a schoolgirl, and Henry Morgan, her teacher. My favourite book was (still is) Lolita and ever since reading it I’d wanted to have a stab at writing the same kind of story from the girl’s point of view. Being Different was my first attempt.

Pleasingly, I still have the story, along with the tutor’s marking and comments, which conclude with the word ‘publishable’. Hooray!

It’s a bit depressing that the issues I was trying to write about are still as relevant today as they were 18 years ago. Only a few months ago in the press we saw a case where a 44-year-old teacher (who, lest we forget, was convicted of having sex with his pupil) evaded prison because the judge, Joanna Greenberg, opined that the 16-year-old girl had ‘groomed’ him rather than the other way around. I could rant about this subject for some time, but that might be a post or article for another day.

Anyway, Being Different was one scene, with just two characters, and survives in Precocious as much of chapter six. Which just goes to show, as far as writing goes, never throw anything away (hoarders of the world rejoice).

A year after finishing university I enrolled on a Creative Writing MA and as part of this, wrote about a quarter of a novel. It was experimental: written entirely in the second person, lots of stuff to do with planets and stars that I thought was terribly clever, narrative jumping all over the place. I finished the course and had absolutely no idea what to do with this bit of a book, so I put it in a drawer and didn’t look at it again for quite a long time.

Fast forward to 2008. I finally realised that no-one was going to knock on my door and ask me to write a novel that they could publish (I know, astonishing, isn’t it?), so I had better just get on and do it. I had two things that I thought were alright: the Being Different story, and 20,000 words of the second person, planets and stars novel, which was basically about a woman cheating on her husband, and not a whole lot else.

So that’s where the idea came from, really: I suddenly thought, what if Fiona were to meet Morgan again, years on from that one scene? What would happen then? And that ‘what if?’ became Precocious.

When I thought it was ready, I sent my book out to quite a few agents, and a handful of indie publishers too (the ones I could find who accepted unsolicited submissions). I received rejections, most of them quite nice, some of them with useful tips on how I could improve the manuscript and a nod to ‘contact me again if you write something else’. The overall theme of the rejections was the same: ‘I like your writing, but in today’s crowded market I don’t feel confident I could place this book.’

Everyone tells you to take rejection on the chin but it does get a bit disheartening and it really was mainly down to the encouragement of my writing group that I kept plugging away. Come January 2014 I decided: I would give Precocious one last push, and if it didn’t go anywhere, I would self-publish as an ebook, sell to any friends and family who were interested, and move on. Because the worst thing was, as long as I had this book on my hands, so to speak, I was really, really struggling to make a proper start on the second novel I wanted to write (I’d had that idea for 3 or 4 years and written no more than a couple of pages – I do tend to let my thoughts germinate for quite a while, it seems!)

That ‘one last push’ was to enter The Bath Novel Award. I thought, if I get onto the long list or (fingers crossed) the short list, this will give me something else to put in my cover letter (with which I was by now thoroughly bored) and might just make me stand out to the next round of agents.

When I got onto the short list, I was thrilled. Thankfully it coincided with me going on holiday to Australia so I wasn’t able to sit around and obsess about it too much, but I do have some notes somewhere that show my thought process – in a nutshell: ‘you’re not going to win, but your book will have been in front of Juliet Mushens so it’s a good idea to get in touch with her afterwards and see if she’s got any tips’.

Well, to my astonishment (I kept refreshing the BNA webpage, convinced they’d made a mistake), I did win, and two days later Juliet was my agent and a little over two months later, we were sending the book out on submission to publishers. Even at this point, the little voice in my head was saying ‘don’t get too excited, it’s possible none of them will want it’ (that voice was, in part, Juliet’s: she was brilliant at managing my expectations whilst herself being totally passionate about and committed to the book and its potential).

But four of them did want it – I met them all, in one whirlwind day in London, over the course of which it finally dawned on me that whatever the outcome, I was going to be a published author. This would be the realisation of a dream I’d had since I was a little girl: I think I wrote my first story aged about six, won a prize and had a story published in an anthology aged nine, and had ever since lived with that nagging feeling that whatever I was doing with my life, it wasn’t quite right; it wasn’t the thing I was supposed to do.

The outcome of that nail-biting, sleepless week was a two-book deal with Ebury, and the decision that I would leave my job and give myself permission (at least for a year) to write full-time.

On Sunday I read publicly from Precocious for the first time, at the Bath Literature Festival. It was one of the most thrilling moments of my life, made all the more wonderful by the fact that members of my family and so many of my writing group were there to support me.

Whatever happens from now on, I will forever be grateful to: the family who brought me up to believe I could do and be anything I wanted; the friends who encouraged me; the Hogs Back Writers for their invaluable feedback and for repeatedly saying ‘why is no-one publishing this book?’; the warm, wonderful people at the Bath Novel Award; the indefatigable force of nature that is Juliet Mushens; and the team at Ebury for their belief in Precocious.

Whoops, I think I just did a spoiler for the acknowledgements section of my book. Oh, well.

I want to close with some advice for other writers. Most of it has probably been said before but it bears repeating, I hope:

When I look back at my ‘Composition & Creative Writing’ submission, I do feel pretty old. It was painstakingly typed up on a word processor / typewriter contraption because we didn’t really use laptops then. I can barely remember what it was like to be aged twenty, about to leave university and enter the so-called ‘real world’. But I also feel hugely proud, and pleased for that twenty-year-old, and the six-year-old who announced that when she grew up she was going to be an author.

It took a while, but we got there. 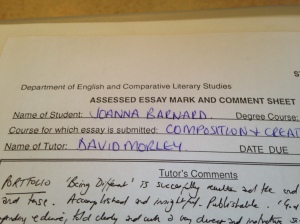